Blog - Latest News
You are here: Home1 / PHP2 / How to insert a context advertisement in the body of articles using PH... 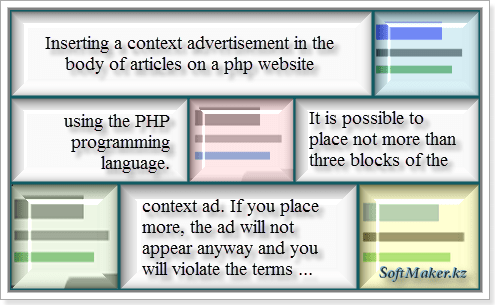 Dear visitors of the blog SoftMaker.kz. Today I would like to discuss how to insert a code of context advertisement in
the body of articles using the PHP language (ru).

Some rules of placing advertisement in the body of articles

Inserting an ad between paragraphs of the article

In order to insert a block of context ad , it is necessary to determine places for advertisement block in the body of article using the rules described above. In harmony with these rules, this is a space between the paragraphs. How to get the needed values which will indicate such places between the paragraphs?

After using the function explode we will receive an array $pieces, consisting of the article’s paragraphs. Now we want to highlight and save unique strings of the article that will indicate the places in the text where we need to add the blocks of a context ad.

In harmony with the rules 4 of ad placement in the text of the articles we have to place ad blocks on the basis of one block per minimum 1,000 characters of the text. Therefore in the cycle of our code there is a condition that checks the number of characters in the paragraphs without counting the characters of HTML and PHP tags. (here we are using the function strip_tags to remove HTML and PHP tags from the string).

As soon as the number of characters exceeds 1,200, we save this place in the body of the article between the paragraphs. As it is already described in the code, we add a separator $tag at the end of the unique string since strings are added to the array without it.

The condition of the cycle checks that not more than three blocks of context advertisement be inserted in the body of the article. This condition is necessary because for example in harmony with the terms of Google AdSense ad placement on the website page
it is possible to place not more than three blocks of the context ad. If you place more, the ad will not appear anyway and you will violate the terms of ad placement on the website. By the way, you can create your own account in Google (ru).

A function for replacing a tag <!–advertisement–> in the body of the article

It happens that it is better to indicate the places in the body of the article in advance in order to insert the block of the context ad. It can be done by placing tag <!–advertisement–> in the selected places of the article. Then to replace these places with the context ad using a programming method.

As it is evident from the above-given code, we replace a tag <!–advertisement–>, using the function preg_replace, that does a search and replacement according to the regular expression . Why it is more convenient to place advertisement using this method? Because you can determine the most suitable places in the body of the article in advance so that they completely comply with the rules of ad placement in the body of the article.

What if you have articles where you have already placed a tag <!–advertisement–> in suitable places, and in other places you want automatic placement of context ad ? How to combine these two methods? There is nothing difficult. You can do the following:

As it is evident from the code above, additional condition was added at the beginning of the join_adv_methods function. This conditions checks the number of tag <!–advertisement–>. This is done using a PHP function substr_count, that returns the number of tag entries <!–advertisement–> in the body of the article. If no tag was found, the context ad is placed automatically . If you want to create an individual design of the your website, please, read the article how to create a working website out of a template (ru).

That’s all! I hope it was explained in detail! Good luck in mastering PHP!

Why does an error message appear in PHP: Cannot send session cache limiter –...

How to get the values of all elements of Edit of dialogue form using Delphi...
Scroll to top

We may request cookies to be set on your device. We use cookies to let us know when you visit our websites, how you interact with us, to enrich your user experience, and to customize your relationship with our website.

Click on the different category headings to find out more. You can also change some of your preferences. Note that blocking some types of cookies may impact your experience on our websites and the services we are able to offer.

These cookies are strictly necessary to provide you with services available through our website and to use some of its features.

Because these cookies are strictly necessary to deliver the website, refusing them will have impact how our site functions. You always can block or delete cookies by changing your browser settings and force blocking all cookies on this website. But this will always prompt you to accept/refuse cookies when revisiting our site.

We fully respect if you want to refuse cookies but to avoid asking you again and again kindly allow us to store a cookie for that. You are free to opt out any time or opt in for other cookies to get a better experience. If you refuse cookies we will remove all set cookies in our domain.

We provide you with a list of stored cookies on your computer in our domain so you can check what we stored. Due to security reasons we are not able to show or modify cookies from other domains. You can check these in your browser security settings.

We also use different external services like Google Webfonts, Google Maps, and external Video providers. Since these providers may collect personal data like your IP address we allow you to block them here. Please be aware that this might heavily reduce the functionality and appearance of our site. Changes will take effect once you reload the page.